Tomorrow, September 15, 2020, it will be the four year anniversary of the car accident that caused me to suffer many injuries, chief among them was a severe Traumatic Brain Injury (TBI) and a coma that lasted three weeks.

As a survivor of a traumatic event, the yearly anniversary is going to arise and instead of approaching it with doom and gloom each year, I would like to start the tradition of looking back on my progress and the positives that arose from a negative. In this blog post, I would like to discuss the changes in my life and the progress I have made since September 2016, with a focus on 2019-2020.

Since this blog has been a good way for me to keep track of change and progress, I’ve decided to go through the year (September 2019 to now) and discuss what events occurred in my post-TBI journey this year.

Reflections on the years post-TBI prior to this year

Since I am just starting to do this blog reflection to review my yearly post-TBI progress, I thought I would start with a little summary of my story up until this year.

As I have said many times on this blog, I have always wanted to be a writer. When the accident happened in 2016 I had two Master’s degrees but I wasn’t working a job that used them. I was a chronic pain sufferer (daily chronic migraines, TMJ, fibromyalgia) who had let nearly two decades of constant pain wipe away any drive or ambition I had to pursue a writing career. I was at a crossroads where I needed to decide what to do with my career. And instead of being able to make a clear and concise choice, fate intervened and I was in a car accident that gave me a severe TBI, 3-week coma, fractured femur, shattered pelvis, and other injuries. It seems fate knew I was at an indecisive crossroads and smacked me clear into the next month (some coma humor for you).

As I say on this blog, I have been “writing my brain injury story” ever since the accident. Well, not really ever since September 15, 2016, since I was in a coma and I really didn’t start writing again until 2018 (when I initially started this blog as a short story writing blog). I also didn’t start writing my “brain injury story” in earnest until summer 2019.

Once I was at a point in my recovery when I could reflect and write about the experience I knew I needed to write my memoir (not because the world needs my story but because I needed to tell it) and I decided to document the writing journey on this blog.

In the summer of 2019, I attempted to write my entire memoir in the month of July (or at least 50,000 words during Camp NaNoWriMo). I didn’t succeed but I did write over 30,000 words and became really motivated to finish. I am still writing it but am still motivated, albeit more realistic about what it will take to finish.

After I was released from the hospital and transitional care, I was released to the care of my parents. While it’s trying at times being 41 and living again with your parents, we truly get along and have a nice time together. I initially started a second blog to document this time with parents (primarily consuming pop culture), but once I decided to focus more on creative writing, I stopped that blog, “Watching Pop Culture With My Parents,” and instead have it as one of my monthly features.

While the years post brain injury saw a lot of challenging and unforeseen changes, I’ve also experienced enough progress to keep me hopeful and keep me trudging forward and really that’s all I hope for… progress.

A timeline of the year I made using images from Pixabay.

General summary of the year

In addition to blogging, I am still working away on my memoir. I stopped posting word counts but my best guess is that I’m at around 66,000 words. I still have so much work to do, especially editing, and I feel like things could change a lot after I edit. I’m guessing that the final memoir will be between 80,000 – 100,000 words.

In addition to blogging for myself I have started to blog for a local organization as a volunteer. My Mom and I were working out with a personal trainer before COVID-19. We haven’t gone back yet but we will. My goal has always been to completely get rid of all walking assistance devices. I am close but still use a cane for longer distances. However. I am happy with my physical progress as it’s heading in the right direction.

One thing that I know will be an ongoing issue for me and may not get better is my hearing. After struggling for weeks this summer I realized that acceptance is an active process that I had treated with passivity. I’m now in a better place and ready to keep moving on and progressing through my recovery.

Even though Halloween may not have many if any Trick or Treaters this year because of COVID-19 (I haven’t read if “beggar’s nights” are happening or not), I still want to dress Selby up. Originally I had a costume for her already that’s a little hula girl. I got it when my family was going to Maui in March. However, COVID-19 hit the world and the United States very hard (it hit the USA starting in March) so our vacation was cancelled and we don’t know when we will get to reschedule. Therefore I am holding off on Selby wearing her hula girl costume and looked for something else. That’s when I found a skunk costume on Amazon. I PhotoShopped a picture of Selby into the skunk costume and below are the results! (I just ordered the costume… so look forward to the real pictures next month.)

Here’s another image of Selby PhotoShopped into the skunk 🦨 costume. You know, for giggles! 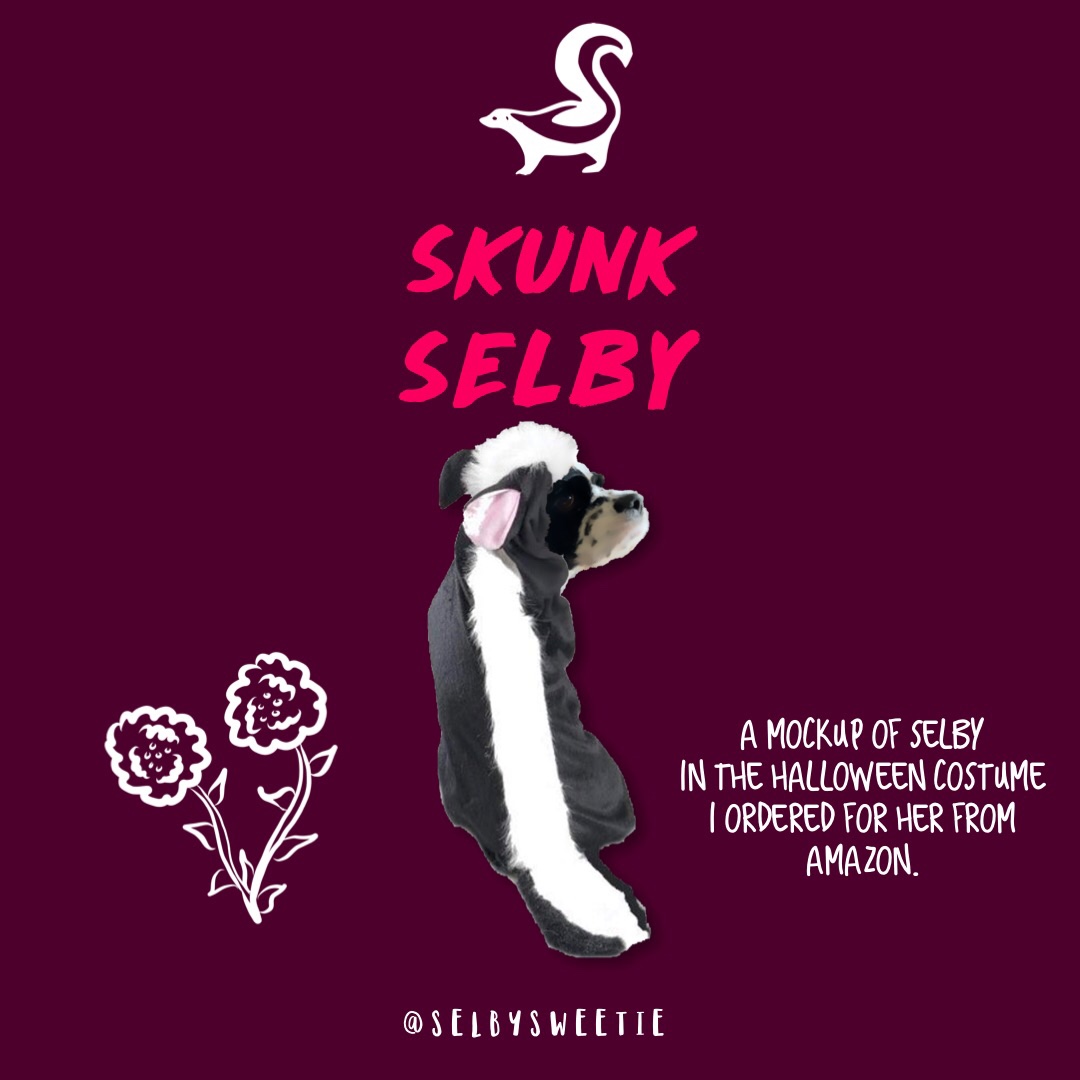 17 thoughts on “My Brain Injury Story: An Anniversary”