As I mentioned yesterday, I got too tired to finish my second Halloween short story last night as planned so I’m posting it today.

The two stories don’t go together (this isn’t a second installment of Sherlock Selby). I’m just labeling this as “Part Two” because they were both suggestions by my social media friends based on my request.

Be ready to get a Minnesota clue. Which is like a regular clue, but nicer. Dontcha know? 😉 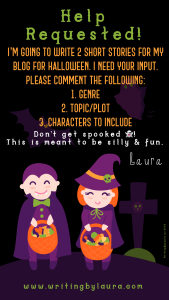 Topic/Plot: A Clue themed murder mystery. Since no perimeters or restrictions were given on this one by friend Ami (Clue kind of has a lot built into it) I decided to add in the place and people associated with my family lake cabin in Minnesota.

Title: Murder at a Minnesota Lake Cabin: A case of Minnesota-not-so-nice 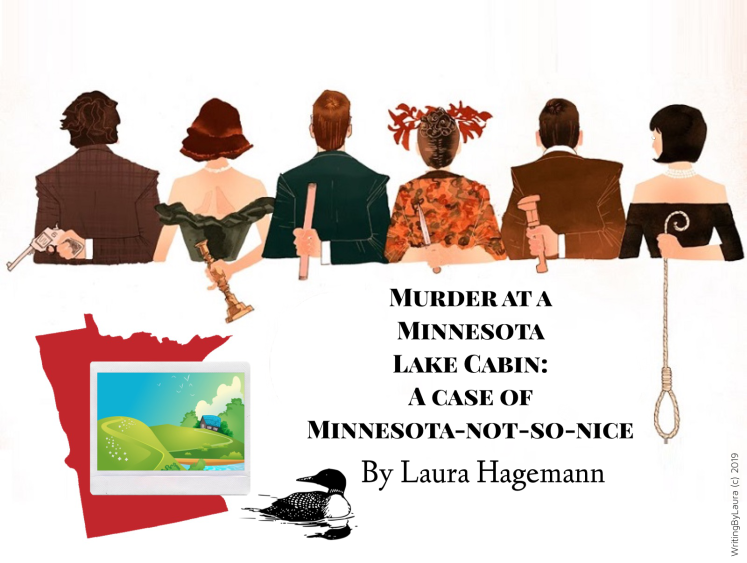 Story: The invitation was unexpected. It was for a dinner party to be held at a neighboring lake house. All of the Hagemanns were invited. Laura shrugged her shoulders as she read the invitation aloud to her family while they sat at the breakfast table. They didn’t know these new neighbors since they had just built their mini mansion and moved into it at the end of the previous summer. The next day when they arrived at the mansion with a hot dish in hand (the Minnesota hostess gift of choice) Laura looked around as they were led into a Hall where they saw fellow neighbors milling around uncomfortably making small talk.

No one really knew this new family, The Anybody family, other than by reputation. They were apparently millionaires that had made their fortune in the board game and games industry. The tag line for their games was “Anybody Games: Because anybody can play the game but not just anybody wins.” It was kind of a snotty tag line, Laura thought but that didn’t stop her from shoving free shrimp appetizers in her mouth as soon as the butler brought them around. “Seriously, who has a butler at the lake?” Will one of the neighbors asked? “Apparently people who play and win the game,” his brother Rob chimed in making the guests gathered in the Hall giggle.

Just then a woman wearing a glamorous dress (that made the other women look down at their casual sundresses with shame) glided into the room and invited them all to enter the Dining Room. It struck the guests as odd that they were eating in the dining room when most summer gatherings at lake houses take place outside on a deck. If you’re from Minnesota you spend every second of the summer outside since the winter is so cold and keeps you inside for long winter months. However, from what their guests could see, the Anybody family lived in Minnesota and had made their fortune there but they did everything they could to be different.

Once gathered in the dining room the guests were introduced to Claire (the woman in the glamorous dress) and Peter Anybody and their children Sebastian and Anastasia. Additionally, there were some guests of the hosts that seemed equally as out-of-place in the casual lake country. Apparently Peter had served in the military so there was a distinguished looking older gentleman named Colonial Mustard (he was retired military). A woman dressed like she was about to attend the Academy Awards was introduced as Ms. Scarlet. She had been a sorority sister of Mrs. Anybody. Mrs. White was a dowdy family friend traveling with her friend Mrs. Peacock. Mrs. White’s husband was recently deceased and Mrs. Peacock’s husband was recently disgraced so the two women had taken to traveling together. There was also a Professor Plum who seemed to have some unknown connection to the hosts. The party was rounded out by a nerdy-looking fellow named Mr. Green who seemed incredibly nervous especially considering it was a casual (or supposed to be) summer gathering. The Hagemanns, Taylors and Schwallers were the lake neighbors invited and they sat uncomfortably in this stuffy dining room.

Dinner was served and even though it was the familiar lake fare of fish it was served with a fussy French cream sauce. After they ate they “retired” to the Drawing Room for coffee. However when they got there the lights went out and there was a gunshot. When the lights were turned back on Mr. Anybody was dead. No one could quite believe this had just happened. The butler tried to organize and calm everyone while they waited for the police to arrive.

It was hard for the Minnesotans to become calm because the whole night was unusual. One thing Laura’s Mom, Maggie noticed that really stood out was that the “friends” of Mr. and Mrs. Anybody didn’t seem distraught at the violent demise of their “friend” and the possibility that a murderer was in their midst. Laura made a sarcastic comment that this didn’t seem real and seemed like a game that ironically Mr. Anybody lost. Badly. Once the detectives arrived they made short work of interviewing the guests/suspects. Never for a second did any of the regular lake residents suspect each other. Even though both families had wanted to purchase the land the Anybody family purchased, it didn’t seem possible that either of the families would kill for the land.

After what seemed like days, the detectives called everyone into the drawing room to walk through what had happened. Mr. Green is standing with the detectives at the front of the room and he doesn’t look nearly as nervous. Mr. Green speaks confidently and reveals that he is an FBI agent who was investigating Mr. Anybody. Apparently Mr. Anybody and his butler were blackmailing all the guests posing as his friends. They came to the lake house thinking the blackmailing was ending only to have Mr. Anybody add new threats. Professor Plum who was being blackmailed for having an affair with a student, snapped at the idea of the blackmailing continuing and decided to shoot Mr. Anybody. The other blackmail victims agreed to cover for Professor Plum. Once the detectives announced the butler was being arrested for blackmailing and Professor Plum for murder the guests are given the go ahead to leave. And leave they do. They all sprint back to their lake homes relieved to be free.

The next day the Hagemanns took every Anybody game they owned and used it as kindling for that night’s bonfire. 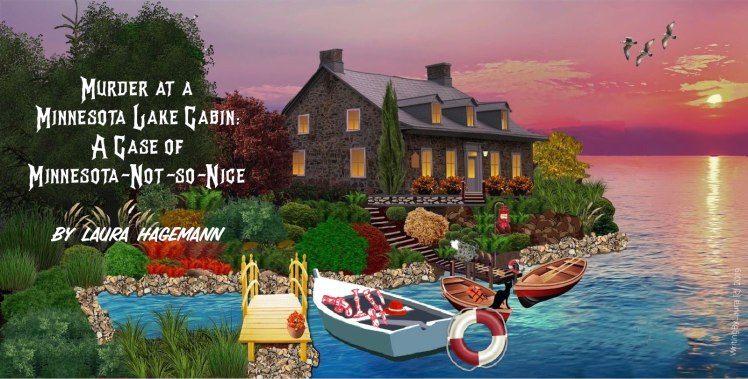 I hope you enjoyed my Clue (or Cluedo as it’s called internationally) inspired short story.

Thank you to my friend Ami for the Clue idea. And thanks to my lake neighbors for being characters.

3 thoughts on “Part 2 of 2 of Halloween short stories”