I have been puttering around and not really focusing on any one book after I finished Trevor Noah’s “Born a Crime” (last month’s reviewed book). I’ve finished a few books since but nothing that really made my heart sing until I found “The United States of Anxiety: Observations from a Reforming Neurotic” by Jen Lancaster. Part self-help and part memoir Lancaster analyzes the anxiety and neurosis of a nation (and herself).

Written in a conversational tone that is very easy to read, this book educated and enlightened me all while making me laugh. I look forward to telling you more about it in this monthly book review.

This book was an Amazon Prime First Reads which meant I got it at a discounted price a month ahead of its release (it is officially released October 1, 2020). I wasn’t familiar with Lancaster, but she is a New York Times bestselling author of several books (memoirs and novels).

The premise of this book is that Lancaster uses psychologist Abraham Maslow’s “Maslow’s Hierarchy of Needs” (which breaks down humans’ basic needs into a ranked pyramid) to analyze her and society’s mounting anxiety. Here’s a graphic of Maslow’s Hierarchy that I found on psychologytoday.com and added some graphic elements.

Lancaster chooses Maslow’s Hierarchy as a means for plotting her way through the crazy labyrinth of the increasing anxiety of society through the years. Her theory is that our anxiety has increased (in part) because of the added stress of technology and social media. For example, since we no longer have to worry about hunting and gathering food we are instead pressured by eating correctly, “we’ve replaced the stress of not having enough to eat with the need to demonstrate how much better we eat than our peers.” She writes about people insisting on telling you their dietary restrictions (when unnecessary) and how it certainly doesn’t matter to her what a person chooses to eat or not eat. And yet, it is pretty common for people to “share” their food and proclivities on social media. And I can’t tell you how often I have wanted to eat, cook or buy something because I saw it on social media (avocado toast, anyone?). Adding all these external stressors and opinions is certainly anxiety-producing. And that was really just an analysis of one of Maslow’s Hierarchy of basic needs (the bottom tier: Physical- the need for air, water, food, rest, health). When I first started reading this book I thought it was a relatively thin premise for an entire book. However, as I got more into it I realized Jen Lancaster’s voice made it feasible to be an entire book. I was struggling to find something to read because of the anxiety I felt about the current state of the world. You would think that reading a book about anxiety to help ease my anxiety probably wasn’t a smart choice. Maybe any old book about anxiety would have been a bad choice but Lancaster is like that friend who you love to chat with because they always make you smile and laugh in part because they are hilarious and in part because they’re relatable. It was her humor and an easy writing style that moved me from page to page. And it was her relatable observations that made me read excerpts to my Mom while I read.

I have mentioned before how my severe Traumatic Brain Injury (TBI) rebooted my brain and in turn, got rid of all the malfunctioning programs (in my brain) like chronic daily migraines, Fibromyalgia and anxiety, and panic attacks. It was an odd thing being rid of these ailments that had dominated nearly 18 years of my life. I have my complications and issues from the TBI (read more about my TBI on this page I have dedicated to it) but anxiety and panic attacks are no longer a problem for me. I have talked to my psychologist about how I feel in the face of this “freedom” from anxiety and panic attacks. Most people in my life didn’t know that anxiety and panic attacks were things I suffered from. Because they were a newer symptom of my chronic pain. So when I realized that panic and anxiety were no longer issues for me, I also didn’t shout it from the rooftops (it would have required too much explanation and back story). I just have quietly thanked my lucky (unlucky) stars. However, I do note situations that would have made me panic. And honestly reading this book made me recognize more situations. It really is a good thing panic and anxiety left my brain as it was deeply altered by a coma and severe TBI because recovery has created plenty of situations that would have caused me anxiety (and no one can heal while in a constant state of anxiety). Another reason that I can easily see situations that are anxiety-producing is that my pup, Selby, is a very anxious pup. She’s little and cute so her anxiety isn’t as alarming as it was in me. Just don’t hide her favorite toy (Lambi) and don’t go vacuuming in her presence. And since she is the very definition of a velcro dog (sticks to you) and has chosen me to get extra stuck to, don’t go separating me from Selby (I’m talking to you bathroom doors🚪… must you be latched tight?).

I would be remiss if I didn’t mention that the anxiety of our United States has been discussed before. It’s a talking point for sure. I even found that NPR has a podcast called “The United States of Anxiety.” What makes Lancaster’s narrative more unique than other things written about anxiety is that it is exactly that, a narrative. By winding her way through Maslow’s Hierarchy by telling personal stories and asides. Personally, in 2020, with the state of the world as it is I don’t think I would have kept with a dry and scientific book. That’s why I am choosing to recommend this book now.

It’s ironic and more likely just incredibly unfortunate (and unlikely) timing that this book’s release is in the middle of one of the most trying and anxiety-producing times in the United States (particularly) and the world in modern history. Once I realized my mind would have to give her the benefit of the doubt since this book was written before 💩 hit the fan, I found this book pretty enjoyable.

My parents, Selby, and I are squeezing the last bit of summer 😎 out of the season by spending time at our lake cabin. It isn’t warm. I honestly don’t mind it because I love Fall 🍁. So, instead of spending time swimming, I am spending a lot of time drawing and painting. Like I have mentioned, I am not an artist. I don’t even play one on TV but I apparently do on this blog! 🤣 So here are a few things I have created this week. 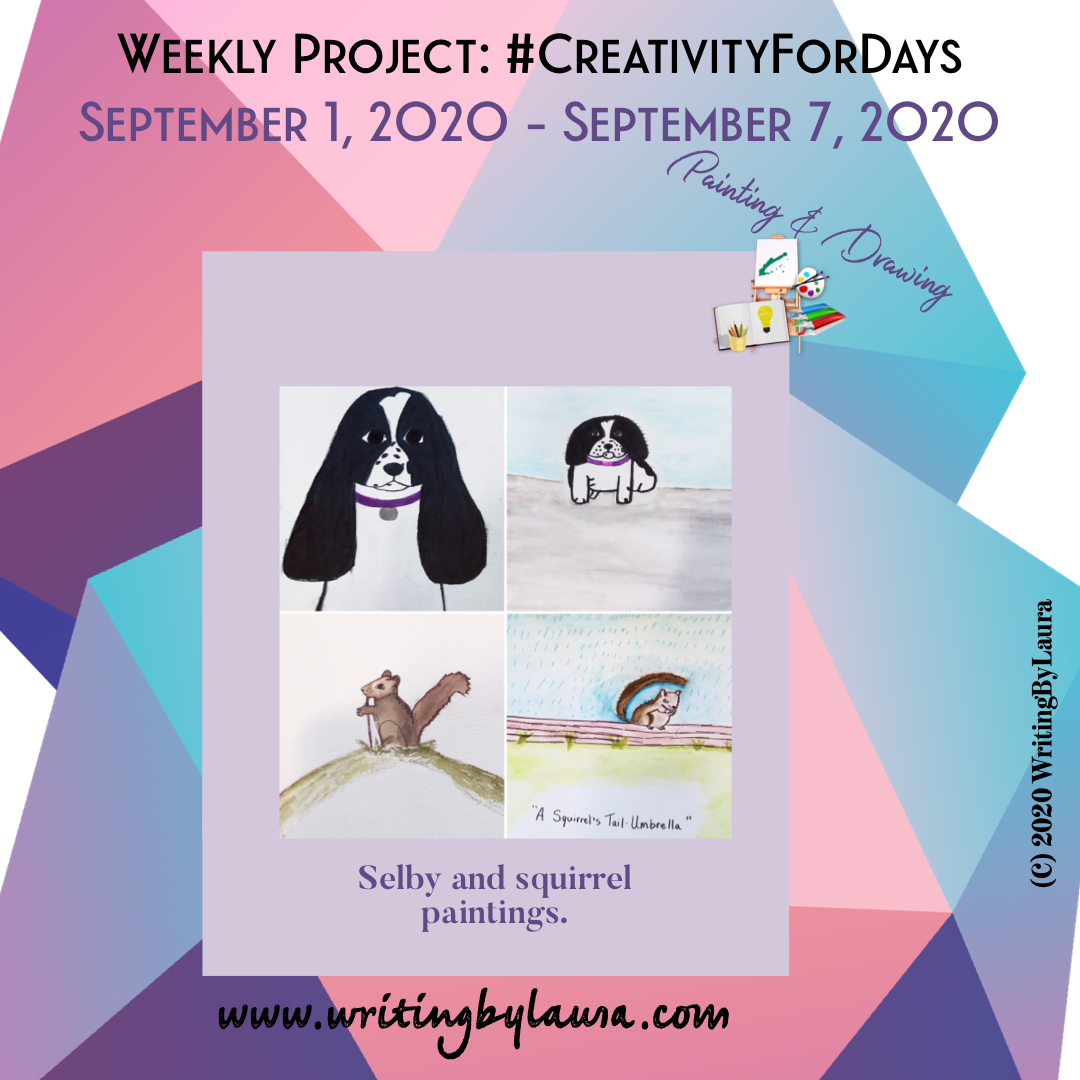 The squirrel paintings are not because I am obsessed with squirrels. My dog, Selby, is. And I’m obsessed with her (as is abundantly apparent on this blog).

Speaking of being obsessed with my dog… I had to include this picture. Here I am sitting on a bench on the edge of our deck and using my legs as a bridge for Selby to walk on in order to smell where a chipmunk had been. Geeze, I’m crazy about her. And crazy.

Here are a few pictures for context and one of the chipmunk. Seriously, what I won’t do for @selbysweetie.

Note: All images unless otherwise stated are from Pixabay or Penguin Random House and graphic designed by me.