Comedian and “The Daily Show” host, Trevor Noah had quite the life before he became famous. His autobiography I am discussing is a reflection of his upbringing and time spent in South Africa. He was born during apartheid in South Africa to a black mother and white father (hence, the title “Born a Crime” stems from apartheid). Noah tells the stories of his childhood in his unique voice complete with pathos and humor.

I found myself drawn to this book because it is an autobiography but like other memoir’s I’ve read like Mary Karr’s “The Liars’ Club” and Diana Marcum’s “The Tenth Island” it’s very different from the memoir I’m writing. And that’s what I want to expose myself to while I’m writing my memoir. After I’m finished writing my memoir I will start to read Traumatic Brain Injury (TBI)/brain injury and injury memoirs. (For those who don’t know: I’m writing a memoir about my severe Traumatic Brain Injury and the resulting coma and my recovery). For now while I’m writing I don’t want to muddy my voice and experience with the voices and experiences of others who experienced similar situations.

So that brings me to this month’s book review of Trevor Noah’s “Born a Crime.” Certainly an experience unlike mine and all the more enjoyable for that fact.

I have been a casual viewer of Comedy Central’s “The Daily Show” since it was hosted by Jon Stewart. Now I find myself watching it the next day (because early to bed) and enjoying every minute. Especially during the COVID-19 pandemic. Noah and his cohorts each are social distancing at their homes and film their segments of the show from their homes. Noah has been calling it “The Daily Social Distancing Show.” And he has found his voice (well, I think he found his voice long ago…more on that later). In interviewing politicians and political figures he asks the questions the viewers want to know. I also recommend watching the recent video “The Daily Show with Trevor Noah” did on sharing information on Breonna Taylor (the 26-year-old EMT worker who was wrongfully shot by police in March in Louisville, Kentucky). Since Jon Stewart was the host, “The Daily Show” has been a smart voice asking the important questions (even though it is technically a comedy show, history shows comedy and satire have always been a way for people to communicate difficult issues). Even though Noah wasn’t as well known in the USA (as in South Africa) when he took over as host of “The Daily Show” it’s clear now [why he was chosen] as the world faces a global pandemic and the country faces the effects of racism. Every time I watch Noah speak on one of the issues troubling the world, I am oddly comforted that he is out there asking the questions and speaking for the voiceless.

As I alluded to before, his voice, as a comedian and person with a platform that gets him notice, is just getting stronger and clearer. I was curious to read his book and find if he’s always been in possession of a strong and clear voice. The answer to that question is yes and no. He had the usual ups and downs of growing up punctuated by the cruelty of apartheid and the struggles of growing up without much. However, through it all has been his ever-present, strong and remarkable mother. He writes about her educating him on how to be a man and how to treat women… the kicker was he was a boy at the time. After reading his book and reading about his experiences growing up in apartheid South Africa it’s relatively clear why he is able to be a voice for the voiceless (his Mom was basically training him for his current life).

The true beauty of this book is that I learned about a life, a culture, a country, unlike the one I know. And with every story and every page I wanted to learn and know more. That to me is the sign of a well-written autobiography/memoir. If the reader feels like they are learning about an experience unlike the one they’ve lived and is eager to read and learn more, then the author has truly succeeded in telling and sharing their story. That is why I am reading a lot of memoirs and autobiographies, I want to learn how others have effectively told their stories and hopefully it will help me tell my story. My brain injury story.

I look forward to watching Trevor Noah’s comedy specials on Netflix. He has two: “Afraid of the Dark” and “Trevor Noah: Son of Patricia.” I particularly can’t wait to watch “son of Patricia” because of how enamored I am with the woman he wrote about in his book (Patricia is his mother’s name). I have also heard that Oscar-winner Lupita Nyong’o is producing and slated to play Trevor’s mother in a movie adaptation of the book. I am looking forward to this happening and hopefully it’s not one of those Hollywood projects that takes a long time to come to fruition.

Note: I read the book but have also read great reviews of the audiobook that is recorded by Noah. If I could hear well enough to listen to audiobooks I certainly would have loved to hear these stories as told by Trevor. However, he is s good writer… so maybe read the book and listen to the audiobook!

I am spending time at my family’s lake cabin and on Sunday I had a lot of fun taking pictures of two loons who were swimming and fishing by our dock. I took many pictures. These are just three of the many. 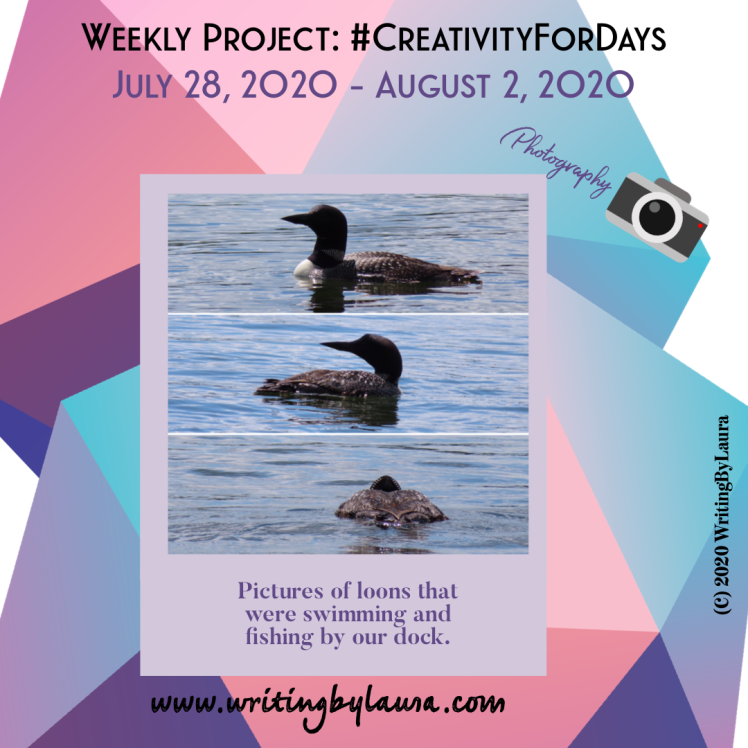 For my birthday in June, my sister and her kids got me a Shutterfly gift certificate so I could order a blanket with pictures of Selby on it (since we know that I take plenty of those). I got it and brought it up with me to our lake cabin and folded it nicely on the back of a rocking chair in my bedroom. Selby saw it and growled and wagged her tail like it was a real dog. I, of course, took video.

Here’s video of Selby growling at puppy Selby is on my Vimeo.

10 thoughts on “Book Review: “Born a Crime” by Trevor Noah”