As I mentioned in an earlier post, I thought I’d write an essay on how living with my Traumatic Brain Injury (TBI) and the hearing distortions it gives me is like living with a horror movie in my head! 😱 And for me that’s particularly horrifying because I really dislike horror and/scary movies! Even though Halloween has just completed, I thought this creepy essay was still appropriate.

For the purpose of this essay you need to know that I was in an accident in September 2016 where I experienced many injuries, chief amongst them was a severe Traumatic Brain Injury (TBI) that left me in a coma for three weeks and extremely diminished and distorted hearing. You can read more about my TBI and hearing loss here and I also link to related posts I’ve written about those conditions on that page. But don’t worry, I explain everything in this essay too.

If you can read this in a dark room in the middle of the night that will up the scare factor! …

WATCH OUT! WHAT WAS THAT!?!

Even though last Thursday was Halloween I thought I could still ride on the coattails of creepiness by writing this essay. The topic isn’t necessarily creepy or scary. But on principle it is. Oh it is.

When I was in an accident in 2016 I suffered a severe Traumatic Brain Injury (TBI) that caused me to be in a coma for three weeks. I also had a fractured femur, shattered pelvis, injured neck and other injuries. As I mentioned, I was completely non-hearing for over three months following the accident. When I did start to “hear” I put it in quotations because it was and is nothing like the perfect hearing I experienced for 37 years.

In describing how my hearing is distorted is when the creepy and scary part comes in.

First I noticed all voices were distorted (even my own and even a dog’s bark). Voices sound like every bad guy in a movie that’s trying to disguise their voice (usually by using a voice distorter to make ransom phone calls). When I did start to hear sounds my brain gathered roughly seven sounds and played them on a loop. I called this my “sound loop.” The loop of sounds played continuously while I was awake. It’s a tad unsettling to be sitting in a room with people and realize they aren’t hearing what you are. This got me thinking that we really don’t know what’s going on in the minds of those around us (mental illness, etc.).

All of these sounds and distortions are still very much present in my hearing today over three years after the accident. The only thing that changed is that thankfully the “sound loop” dropped off roughly three months after it started (I had a virus and ran a high fever). And I would say my understanding of the “metal on metal” noise of music makes it so it has a little more dimensions than when I first experienced it. If I just listen to a song with one singer or minimal instruments it sounds really out of tune and haunting (and not at all like I know it should). Scary movie soundtracks have been using the minor key to heighten the eeriness factor for years and now I understand why.

I can understand and hear higher tones, frequencies and voices better than low. If someone talks with a really low voice it sounds really distorted to me. I can’t hear most accents unless the voice is higher pitched. This is a real shame because I love ❤️ accents and used to be good at understanding different accents, etc. It’s a particular bummer when I’m watching TV or a movie with my parents and they tell me someone has an accent. They are both TERRIBLE at telling where an accent is from. They get Italian confused with French and English with Australian. I can actually tell better than they can by just reading lips! (They read this blog… Hi Mom and Dad… this isn’t anything I haven’t told them to their faces!!)

It’s been over three years since my accident and I’m only now really coming to terms with how I was immediately following awakening from the coma. I have been going to a Brain Injury Support Group and when others speak of their injuries they mention the pain. For what I went through there was a remarkable lack of pain. However, that sounds like I was just not suffering. I was. It was just a different kind of suffering. As someone who experienced chronic daily migraines and Fibromyalgia (before the accident) that made every cell of my body feel like it was radiating at a different pain frequency, I am intimately familiar with pain. The feeling I had after the coma was a void. I felt like the holes in Swiss cheese. After feeling constant pain and then feeling a void I can’t really tell you what’s worse. That sounds odd to say (because obviously you’d choose no pain) but in addition to the void I didn’t know what I was experiencing.

I mean, I didn’t know I was deaf after the coma. My family and the medical staff were treating me like I could hear because there was no reason to suspect otherwise (I was instinctively reading lips). I couldn’t tell them I wasn’t hearing because I didn’t know it myself. If that isn’t like a horror movie I don’t what is. The void I felt was akin to the holes in Swiss cheese. The blankness and Swiss cheese hole-like void I felt wouldn’t let much or anything break through.

This horror movie doesn’t end tragically though (as they usually do, I think) because even though my hearing and my brain are permanently altered I feel like this experience has given me a lot. I have a voice, drive and passion when it comes to hearing accessibility. I’ve started to get involved in local groups that maybe need my voice. (Note: My voice is certainly louder now that my hearing is compromised, so hopefully that helps me be heard as I speak up for hearing accessibility causes.) 😉😂

Yes, I would like the distortions to stop. Yes, I would LOVE to hear music again. Yes, I would love to hear the voices of loved ones not distorted. But I’m not sure that’s going to happen. If it does: YIPPEE 😁 🥳. If not, I refuse to wallow.

Since I can’t have a creepy (humor me… I know this wasn’t creepy) essay end on a mushy and positive note, here’s something I wrote earlier that’s creepy. The actor Joseph Gordon Levitt (“500 Days of Summer,” “Inception,” “Looper) has a website called hitRECord.org that encourages artists of all kinds (writers, directors, actors, illustrators, etc.) to stop procrastinating and just simply “Hit Record” or create. The site encourages people to upload their original content and other people can add their form of art to it. For example, if I put a short story up someone could animate it, another person could compose music, another person could add voiceover, etc. It’s a great concept that Joe has used to produce a TV show, books and a movie. If your original art is used to produce something commercial you get a portion of the profits (find out how it works here).

I am a member of “HitRECord” although not very active. A while ago there was a writing challenge to “Write a Terrifying Tale in Two Sentences.” I used my own experience with my hearing after my accident as my inspiration (see below).

See. Pretty scary. If you ever wonder what’s running through my head… it’s that! Oh, and I think about my puppy Selby a lot.

Slow and steady on writing my memoir. I’m at 42,459/50,000+. I’m not doing NaNoWriMo this year (it started November 1) but instead I’m focusing on finishing my memoir. 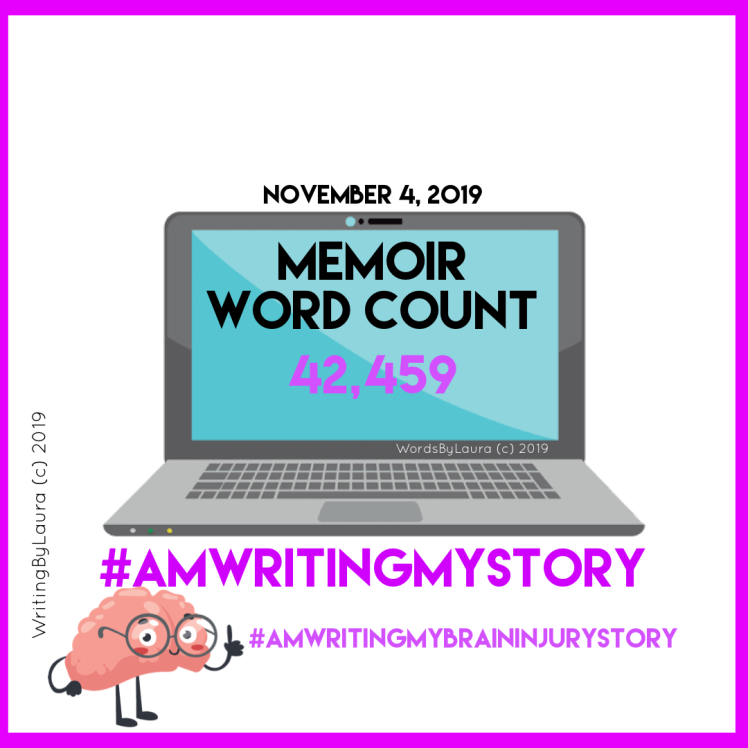 Programming note: Typically the first Monday of the month is a book review but I decided to change up the schedule this month and just swap the book review and essay. So the book review will be on the third Monday instead of the first.

10 thoughts on “Essay: The Sounds are Coming From INSIDE My Head”