Since my trusty posting schedule didn’t really account for longer months that roll into five Mondays instead of four Mondays I’m going to say that I will use those times to wedge in an extra Pop Culture Post a la the blog I’m merging into this one: Watching Pop Culture With My Parents.

Here’s my original posting schedule that doesn’t accommodate for a fifth Monday.

So for this fifth Monday (I feel like “Fifth Monday” would make an excellent nerdy band name… speaking of pop culture) I have made a new posting schedule to allow for this that shows I will post “pop culture related content” on months that have a fifth Monday. This will be (if I figured correctly) April, July, September and December (in 2019). See my new content table below. 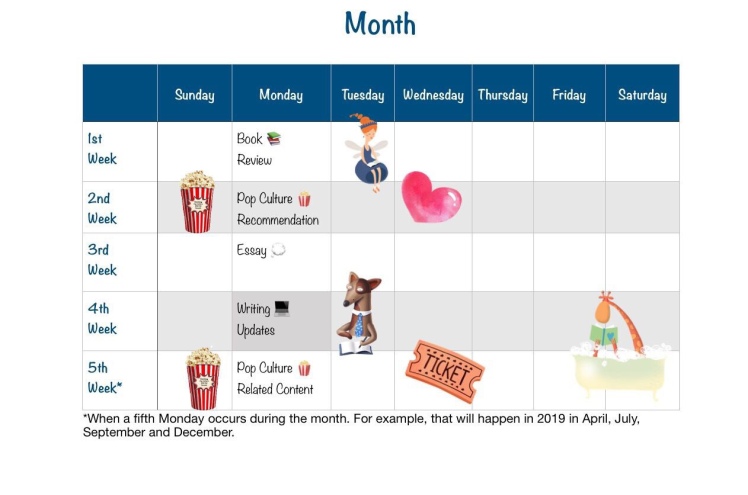 Now that I have that boring stuff out of the way, it’s time to talk about the pop culture my parents and I are consuming.

We watch a lot of HGTV! Currently we’re really enjoying that “Boise Boys” (Wednesdays 11e/10c) premiered for the second season last week. Clint and Luke are two friends flipping houses in Boise, Idaho. Clint Robertson is a contractor (and his Twitter is @genuineclint) and Luke Caldwell is a designer (his Twitter is @lukecaldwell). They are both talented and fun to watch Clint says “good grief” almost as much as Charlie Brown! I already wrote about and recommended the show on my other blog (and now that the blogs are merging I wanted to mention the show here too).

We are slowly watching season 2 of Netflix show “The Crown.” We have three episodes left of the second season. I’m savoring it a bit since the end of Season 2 marks the end of this current cast. I found this article by The History Channel that covers whether the history covered in Season 2 is accurate. (WARNING: There are spoilers.) When Season 3 premieres (I don’t think a date has been announced yet) they will be using an all new cast. Oscar winner Olivia Colman will be replacing Claire Foy to play Queen Elizabeth in the 1960s and 1970s. I like Colman a lot (loved her in “Broadchurch” and her Oscar-winning turn in “The Favourite”), however I will miss Foy and it may take me a few episodes to get over it. This article I found talks about what is known about Season 3, including that there will be a Princess Diana. In earlier press I was reading speculating about Season 3 they weren’t sure if Princess Diana would be included.

I’m also reading a lot. Currently I’m enjoying “Conversations with Friends” by Sally Rooney. I will be review the novel next week in my May book review. “Friends” is Rooney’s first novel and her second was just released (which I will also be reading). I have to balance out all that TV and Netflix watching with reading!

As I mentioned previously, I’m merging my old blog with this one and I hope to figure out how to archive it on this blog (because I made some funny jokes on that blog I don’t want to go to waste 😂).