I decided I wanted to do a contemporary author for my first author recommendation. As someone with a bachelor’s and master’s in English, I’ve read a lot of the classics (i.e. Old Dead People!). I thought it’d be fun to recommend someone who’s alive, kicking and writing about our world as it is right now (and someone you can follow on social media: Twitter: @rainbowrowell, Instagram: @rainbowrowell and Facebook). My first author recommendation is author Rainbow Rowell (www.rainbowrowell.com). She has written young adult and adult fiction. 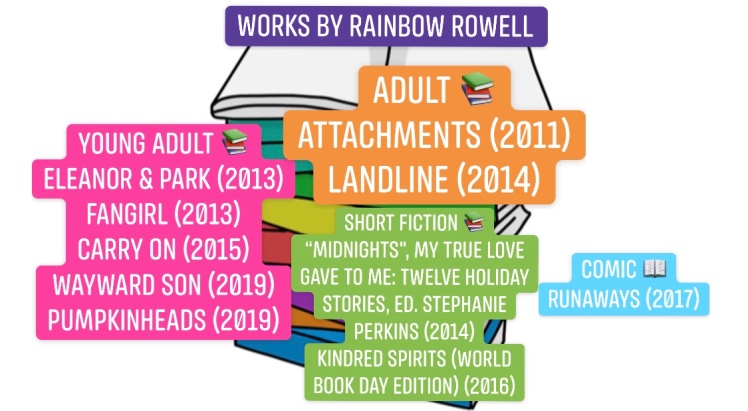 The first book of hers that I read was her highly acclaimed young adult novel “Eleanor & Park.” I was hooked by her voice. She writes the way I hope 🤞🏻I write. While “Eleanor & Park” was classified as young adult they were written as realistic humans. I knew someone very similar to Eleanor growing up. Oddly a Minnesota school got up in arms about the book. They disinvited Rowell from a library event. Really! Have some hot dish and calm down! For Pete’s sake! (I can say this because I am in the Midwest.)

I then proceeded to read (nearly) everything she’s written and actively seek out newly published works. She’s also writing Marvel Comic’s revival of “The Runaways.” I haven’t read those yet. The revival she’s helming started in 2017.

Rowell used to be a columnist and ad copywriter (I used to work in advertising) at the Omaha World-Herald and lives in Omaha, Nebraska. She even wrote one of her novels, “Fangirl,” by participating in NaNoWriMo (National Novel Writing Month- which I’ve done). She also dabbled in “FanFiction” (the genre where fans use characters/stories from famous fiction to create their own new fiction). Her FanFiction was Harry Potter FanFic (I ❤️ Harry Potter). She then ended writing novels called “Fangirl” and “Carry On” that are inspired by the genre. In other words she’s a nerd’s nerd! (I can say that as I’m a 🤓 too!) This New Yorker article is a great piece on fanfiction.

I have had conversations with people who just can’t take young adult fiction seriously as adults. I rediscovered the genre when I took a children’s literature librarianship class in graduate school. There truly is some fantastic writing in young adult fiction and limiting yourself to just adult fiction is truly silly. You watch cartoons and animated movies sometimes, don’t you? It’s also limiting to call Rainbow Rowell a young adult author. She writes adult fiction as well. I suppose that’s also why I’m doing this author recommendation of Rainbow Rowell: more people need to read her books and know about her. I had heard that DreamWorks bought “Eleanor & Park” to turn it into a movie but it looks like they’ve sold it back to Rowell. It’s good she owns the rights but more people need to meet Eleanor & Park!!

I’m recommending Rainbow Rowell because her voice is so clear, strong and precise. And I hope she continues writing for a long time.

Whew… I nearly made it through this whole post without making a rainbow joke or using the 🌈 emoji. But you know… I am my father’s daughter and a rainbow joke was going to have to be SOMEWHERE!