This weekly installment of #TBIthursday is really not a memory or story like the other posts have been. Instead, this is a pep talk. It’s aimed at me now and in the future and at others suffering from anything (TBI, pain, anger, fear, chronic pain, illness, etc.)

I was giving sage advice to someone (why is it I can give advice but not take heed of it for myself?) and said “give yourself permission.” What I meant was to give yourself a break and don’t beat yourself up for whatever you’re going through. This was the advice I needed to take when I suffered from chronic pain for 18 years. Yet, I didn’t give myself permission or give myself a break then and I think that made my suffering greater.

So now that I am going through a different kind of suffering (recovering from a severe TBI), I am telling myself (and you) in this #TBIthursday to remember to give yourself a break and fire your inner critic and instead hire your own personal cheerleader.

If you’re anything like me, you have been employing an inner critic since at least adolescence. When I was suffering from daily chronic migraines, TMD/TMJ, and Fibromyalgia, that inner critic began working overtime. It went from the semi-encouraging mother telling you to clean your room to an old, haggard, chain-smoking lady throwing things at you if you got too close to her lawn. (I’m telling you that my brain and imagination is like a crazy cast of characters straight out of Hollywood’s central casting.)

Needless to say, this haggard, chain-smoking inner critic was not easygoing. She never gave me a break. And therefore, I didn’t give myself permission for anything. I didn’t allow myself to be in pain, be sick or frustrated without fully unleashing this inner critic (“Oh, you’re in pain AGAIN, is that really a good excuse?”) And by employing this cranky inner critic I prolonged my pain and suffering. When if I had just given myself permission to be in pain I would have been able to suffer and then recover. Hopefully.

And by permission, I mean give yourself permission to be [fill in the blank: angry, sick, tired, hurt, defeated, etc.]. Whatever you’re working through (whether it’s physical or mental) you need to give yourself a chance to work through it. Without beating yourself up… or employing an inner critic.

If I had done this for myself when I spent my 20s and 30s dealing with the pain and suffering of chronic daily migraines, TMD/TMJ, and Fibromyalgia, I would have saved myself a lot of heartache. I worked 45+ hours a week in a relatively high-pressure job while I went to graduate school at night. I got two graduate degrees doing this. And it was hard work. But I never gave myself a break when things got tough.

There is a saying that you’re your own worst critic. My life pre-TBI that was certainly the case. Even though I was certainly high functioning, I felt like I was always failing. In truth, I was only failing my own expectations.

After my severe Traumatic Brain Injury (TBI) in 2016, I turned from my own worst critic to my own best cheerleader. It’s challenging recovering from the injuries I had sustained and instinctively I knew this and fired the critic and hired the cheerleader! Because if I had continued to be as hard on myself as I had been up until the injury, my healing and recovery wouldn’t have been very successful.

In last week’s #TBIthursday post I wrote of my challenges with my hearing post-TBI and how that was affecting me currently. Then, in Monday’s post, I wrote about my “pandemic funk.” Truthfully my hearing and the funk I was in were deeply connected (and of course the pandemic didn’t help).

Now, this week I spoke with my psychologist (I have been seeing one since the TBI) and he helped me connect some thoughts I had been having that have helped me to give myself a break (“Hooray!” says my inner cheerleader). I wrote last week that I needed to stop comparing myself to others. And my psychologist brought up someone else that I was subconsciously comparing myself to: pre-TBI me! I was especially comparing my hearing now to my once perfect hearing pre-TBI. Why? That’s my critic, again, gaining hold and I thought I fired her!! Seriously, Cheerleader Laura, you need to silence that lousy critic with some boisterous cheering! 📢

So, after firing that inner critic again (seriously, retire already Ms. Critic), and thinking long and hard about how far I have come and my hearing has come, I am on the path to accepting my hearing for what it is and stopped comparing it to what it used to be. I have a feeling this is an ongoing battle of reminding myself to stop comparing and just let it be.

Instead of a “Selby Sweetie Conclusion” like I do on my weekly Monday posts, I thought I would end these #TBIthursday posts with a “throwback” picture from Selby’s puppyhood! Three years ago yesterday I posted a picture of @selbysweetie enjoying her very first ice cream treat! So in honor of that memory, we gave her a dish of ice cream last night. This picture is a side-by-side comparison of two years: 2017 and 2020! Have I mentioned how much I love this pup and how I feel she has helped in my healing post-TBI? I only mention it all the time. But I mean it!! 🐶❤️ 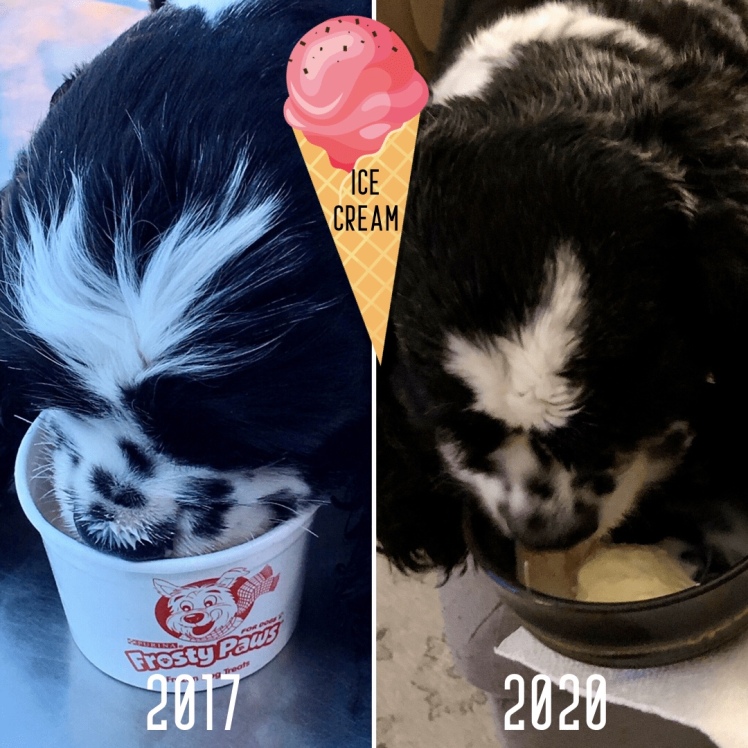 Note: Images designed by me with imagery from Pixabay.

2 thoughts on “#TBIthursday: Fire the critic and hire the cheerleader!”